8 Worthless Habits You Do Everyday That Are killing Your Productivity

Have you ever felt like 24 hours is not enough? It’s like time went by so fast, and you haven’t really accomplished anything.

Your son was throwing fits because you haven’t spent time playing with him.

Why? Why is 24 hours just not enough?

Well, it is because you have habits that kills productivity

But what are they?

These are the 8 Habits that Kills productivity

We’re moms already. We have a family, and we’re supposed to manage our time well. I know that, but we’re humans too.

We fall trap to being BUSY.

It was my father who told me that.

I want you to know that being always busy doesn’t mean you’re productive. It sometimes mean that you are doing a lot of unnecessary things that consume so much of your time.

01. Spending so much time on Social Media

Scroll up. Scroll down.

Watch a video. Scroll on videos.

Watch the next video.

So on and so forth.

Oh come on, don’t tell me I’m the only one who’s drowning into social media once I open it?

According to a study, a person spends an average of 3 hours on Social Media.

Imagine what you can do in those 3 hours.

You can already prepare dinner or wash clothes or write another blog post.

So instead of spending so much time on Social Media:

While multitasking was an essential skill when I was working in the BPO industry (talking to the customer on the phone while jotting down notes), it’s not as effective as we think it is.

In fact, the more we multitask, the less productive we become. And not only does it trigger stress, we’re also prone to make mistakes in our tasks. This one of those habits that kills productivity that we don’t even notice.

So instead of multitasking:

Honestly, I have a few games installed on my phone. I actually use them to distract myself from loneliness and homesickness.

I am an overthinker (which is another worthless habit), so every time I sit down and do nothing, I drown myself with crazy thoughts that can blow my relationship with people.

That’s why I have Sims Mobile and Cytus 2 installed on my phone. And if there’s a new quest available for my sims? Oh gosh, imagine the hours I spend on that.

So instead of spending so much time playing mobile phone games:

Shiny object syndrome is when you always chase shiny new things. They look so bright and pure to you.

This distracts us on the things that were supposed to focus on. Instead of spending our time on the essential tasks on our to-do lists, we spend it chasing these shiny new things instead.

I have shiny object syndrome. Guilty as charged. Unfortunately, I spiral down my path when I see a new website design or a new niche I think I can do.

Do you know how many times I’ve changed my blog theme? I can’t keep track, but I’m sure more than 15 times. Why? Because when I see a new color palette or a unique style, I want to integrate it into my website right away. I spend hours of design and research even though there’s nothing really wrong with my website design.

Or when I read a blog and then little did I know I’ve read all that website’s blog post for the year.

That is why it’s so important to set goals to avoid SOS.

05. Watching too many Netflix Movies

There’s just so many series to watch — Crash Landing on You, Hi Bye Mama, The Originals, Locked Up and the list goes on.

I am guilty of this. And the urge to just watch the next episode? Ugh. Sometimes I just don’t notice that I have been watching 5 episodes straight and I have barely done anything the entire day.

I don’t plan on cancelling my Netflix subscription soon because it’s a great and cheap source of entertainment. Tee and I bond along watching Money Heist or Suits. Dreu watches cartoons. It’s an amazing app.

But if you let it rule your life and you don’t do anything productive but watch Netflix Movies, then I don’t think it’s a good idea.

So instead of watching too many Netflix Movies?

I think I may be one of the most disorganized people alive. Everything’s just all over the place.
My drawer is messy, my computer is cluttered. No system.

I used to forget what to do next after writing a blog post.

Not having a system in place just clouds our focus and wastes so much of our time.

So instead of not having a system in place?

From the word itself, over-thinking — thinking too much. Instead of doing something or acting on the things that need to be done, I waste my time thinking about other people, my son’s future, my past relationships, everything I can put my mind on

I keep on thinking about the what if’s and the whys. I worry when there’s nothing to worry about.

This happens a lot when I am lying on my bed and not doing anything.

My father always says, “An idle mind is the playground of the devil.”

Which just recently, I’ve proven to be true.

So instead of overthinking:

This attitude just gets the best of me. I don’t want to publish a blog post that I think is less than perfect. Or a graphic design that I think can do better.

Creating a quality outcome for whatever you do is very important.

So stop aiming for perfection.

The downside of being a perfectionist is that we set standards that are impossible to achieve.

But in reality, you know what we are? We’re just afraid to be judged by other people.

So instead of being a perfectionist:

You see, we do so many of these things and we have no idea how greatly it impacts our productivity, how these habits kill our productivity. I mean, sure, there’s nothing wrong with playing mobile games here and then.

But if we spend so much time on it, we waste one day. And that one day could’ve been spent on essential things relevant to your goals in life.

So the next time you feel like making these counterproductive habits, do the opposite instead and refocus on the important things.

By doing so, you can have more time spent on your family and you can reach your goals faster, too. 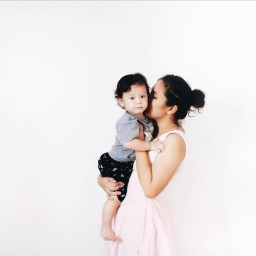 At Love From Sza, my goal is to help young moms like me to love more and live more; and we can achieve that using the right tools, right planning, organization, and mindfulness. In my blog, you will read a lot of things that can help make your life easier so you can spend more time loving your kids and having fun with them. I also help and motivate moms to earn while taking care of our kids so we can feel a sense of fulfillment and a great sense of achievement.

Daily Schedule of a Filipina Homebased Mom With a Toddler